When I first started this blog, I had grand plans of what it could become. But I have to face the reality that for bus news, the internet is already pretty well served. Plus, to give this blog the depth of coverage that I would have liked would take up far more time than I have available.

So it is with regret, that I have decided to close the British Bus Bugle. It might well reopen again in future if circumstances change. I remain committed to and will continue to run my other blogs, Southampton Bus Update, Great British Bus Routes, Brentwood Bus Update and Portishead Bus Update.

I've moved the live links to other blogs up to the top of the panel on the right, so that you still have ready access to up-to-date bus news from around the country.

Thanks for reading.
Posted by SotonBus at 11:47 No comments:

Electioneering on the buses

With an election on the way, Labour have been talking about how the nation's buses are run. Their plan is to allow councils to plan local routes and set timetables and fares, as well as to let community groups set up not-for-profit bus operators. The article linked to above says that the 'stranglehold' of the big bus operators will be broken, but that doesn't necessarily have to be the case. Those operators who provide a good standard of service and have a good relationship with local authorities could probably expect to win several contracts or maybe to even have certain local free markets retained.

I'm not even convinced that the position of the large operators is a bad thing. It very much depends however on which of the big boys controls bus services in an area. Compare how easy a Stagecoach city is to get around with somewhere like Bristol for example.

The free market has failed some places. If it worked everywhere, it would have been imposed on London after all. But it isn't failing everywhere.

What is needed is better provision for those places left cut off from the commercial network and better integration between operators and other transport modes, at least from the passenger's point of view. Whether that comes from a form of what we have now or bundling routes under council control, that are then franchised out as a network (probably to one of the existing big groups) is for others to decide. But if the network continues to fragment and be useful to fewer and fewer people, you will have more commercially viable routes becoming unviable until eventually there is no profit to be made from bus operation. The Conservative stance of ever deeper cuts would hasten that decline.

I write this as someone who has used buses all of my life but has bought a car after moving to North Somerset due to the absolutely shambolic service being provided by First Bristol. More on that in future posts.
Posted by SotonBus at 23:32 3 comments:

Motorists have benefited from a recent cut in the price of petrol, now approaching £1 a litre, compared to around £1.30 a litre in August.

Many bus passengers are wondering when they will benefit. Stagecoach and First have told the Manchester Evening News that they can't cut fares because they buy their petrol in bulk in advance at set prices in order to avoid price fluctuations.

I'm sure that's true. But if the petrol being used by their buses now was bought a couple of years ago at a higher price, surely their buyers will be buying petrol at today's low prices for use on the buses in a couple of years time. If they aren't, they're not very business-minded. So lower fuel prices will trickle down to the bus companies sooner or later.

Any car owners comparing the cost of driving or taking the bus will have seen the petrol cost of a journey come down some 30% in the last few months, while bus fares have generally risen. The bus business needs to address this if it is serious about appealing to anyone who has a real choice.

The Chancellor of the Exchequer agrees and has been telling the Express and Star about it.

So, when can fare-payers expect to see some of the benefits of lower fuel prices? Bus companies, it's over to you.
Posted by SotonBus at 20:11 5 comments:

The Plymouth Herald reports that the Liskeard depot and associated routes of Western Greyhound have been purchased by Go Ahead's Plymouth Citybus and will be rebranded as Go Cornwall Bus.

It remains to be seen what will happen to the rest of Western Greyhound.

Our Council Check series is taking a break for a couple of weeks. In the meantime you can catch up with the scores so far and read all previous reviews here.
Posted by SotonBus at 21:51 3 comments:

This week's local authority is SESTran, which takes care of transport for several authorities in South-East Scotland, including Edinburgh. How do they promote the bus routes in their region? 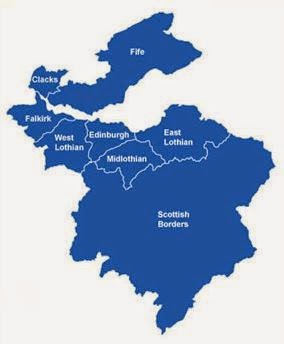 There's a regional public transport map, but it has a disclaimer stating that it doesn't include routes that are wholly within one council area. SESTran suggests trying the local councils for local routes, but they're under the impression that SESTran is taking care of everything. It then suggests Traveline Scotland, on which you can search for all routes serving a particular area, but it is rather clunky and awkward to use. 3 out of 5.

Not provided. The best place for these is Traveline, which in Scotland is not as user-friendly as it is in the Midlands and South of England. 1 out of 5.

No information on single tickets or operators' own tickets. There is however a region-wide multi-operator and multi-modal ticket, the One-Ticket. No mention of Plusbus, which is available in Bathgate & Livingstone, Dunfermline, Edinburgh, Falkirk, Kirkcaldy and Linlithgow. 2 out of 5.

Not comprehensive and leaves you scrambling around several other websites in order to find complete information. Not really good enough for the transport portal of the region containing Scotland's capital. SESTran scores 6 out of 15.

Each Sunday, we take a look at a local authority's attempts to publicise the bus routes on its patch. This week, it's the turn of Cumbria County Council. 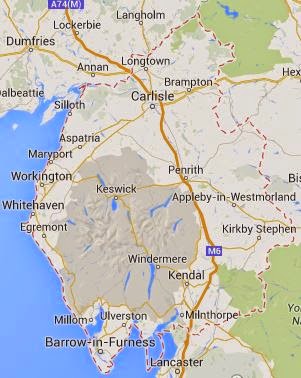 A range of maps cover the whole county, including separate enlargements for the main towns. 5 out of 5.

Bus timetables for all routes in the county are here. 5 out of 5.

Nothing about single fares, but this page gives details of the day tickets available. Unfortunately some of the information is out of date, such as the prices of Stagecoach Dayrider tickets. Plusbus, available in Barrow, Carlisle, Kendal, Whitehaven, Windermere and Workington, is mentioned. There is no multi-operator ticket, but then Stagecoach run all of the major routes anyway. 1 out of 5.

Cumbria is very geared up to welcome tourists. Maps give a good overview of which bus goes where and timetables are easy to find. A point has been deducted for the out-of-date prices given for Stagecoach tickets, but this is overall a good effort for one of the main tourist regions of the UK. Cumbria County Council scores 11 out of 15.
Posted by SotonBus at 07:00 2 comments:

Each Sunday, we look at how one of our local transport authorities provides information on the buses running in its region. Today, it's the turn of Strathclyde Partnership for Transport, better known as SPT. 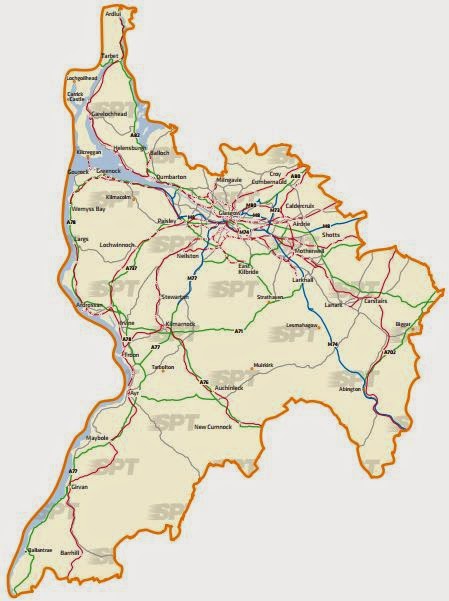 There is a timetable section, but it only covers those routes that are subsidised by SPT. Most bus routes are commercial and SPT offers absolutely no help (other than a list of commercial operators) to potential passengers regarding those routes. Traveline does have timetables for all routes, but SPT don't tell you that, and it's rather difficult to use anyway. 1 out of 5.

There is a region-wide multi-operator and multi-modal ticket, the Daytripper. But there is no information on single or return fares, nor on operators' own day tickets. No mention of Plusbus, which is available in Glasgow, Kilmarnock and Ayr. 1 out of 5.

So, you have no way to find out which bus goes where, let alone a comprehensive route map, no easy access to timetables for the majority of routes and next to no information on fares. The only thing SPT can seem to do right is promote the Daytripper ticket. For a region of huge interest to tourists from elsewhere in the UK and from abroad, this is a shockingly poor offering. SPT scores just 2 out of 15.
Posted by SotonBus at 07:00 4 comments: