Stagecoach swallows Norfolk Green / Round up

Stagecoach are buying Norfolk Green, it was announced today. For the full story, see Focus Transport and the Eastern Daily Press.

Stagecoach's nearest operations are in Cambridgeshire and Lincolnshire. Norfolk Green's current network of routes centres on Kings Lynn and extends to Cromer, March, Spalding and Norwich. 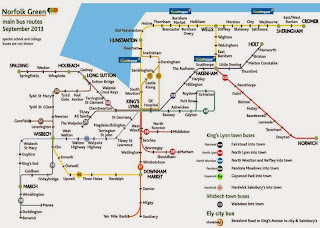 Talking of Norwich, the local Evening News reports of a change in operations at the city's bus station. The travel desk is currently run by Norfolk County Council but from 27th December, Go Ahead's Konectbus will take over.

From that date, First tickets will no longer be available from the travel desk. Passengers will still be able to buy tickets for Konectbus, Anglian Bus and Park & Ride services, but only if paying by card. Cash will not be accepted.

There are cuts on the way in Lancashire, with the County Council apparently about to cut funding for all evening and Sunday supported services. See the Lancaster Guardian for more details.

The York Press reports that some bus cuts announced by North Yorkshire County Council may be saved after all. North Yorkshire is one of the very worst counties in the country for public transport provision and information.

Cardiff Bus have launched mobile ticketing, allowing people with iPhone and Android devices, but not Windows phones, to purchase and store tickets on their mobile. Arriva and Go Ahead have already been offering mobile ticketing for quite some time.

Buses have been disrupted at National Express Dundee, report the Courier and the Evening Telegraph. It's not a strike, but a work-to-rule with some drivers declining to do overtime. The union says it is in protest at a prolonged period of understaffing at the company.
Posted by SotonBus at 22:01