We've heard for months about Transport for London's plans to stop accepting cash on its red bus network. this takes effect as of Sunday. From then, you'll need either an Oyster card or a contactless bank card in order to use any TfL bus. This also applies to those TfL bus routes that cross the border to serve places outside Greater London, such as the 498 to Brentwood.

Taking effect on the same date is a fare cut for most First bus passengers in the area formerly known as the county of Avon. Fares have already been reduced in the Bristol Inner zone following a passenger campaign and subsequent consultation. Now the same is happening in the Bristol Outer zone and the rest of the West of England region. Full details from First here. The main changes are as follows:

From Sunday, you'll be able to find out the new fares in advance by looking up a journey on the timetable section of First's mobile website. Here for example is the current fare for a journey from Portishead to Bristol: 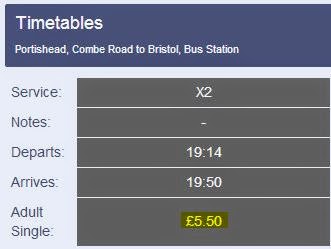 If the fare structure is as described, the same journey should cost £4.50 from Sunday. I'll check the website then to see whether that is the case.

You would never have had an initiative like this from First a few years ago. Passengers numbers in the Bristol Inner zone are up since fares were reduced there back in November, so this region-wide move should revitalise the bus service over a much wider area. I have recently moved to the region so am particularly pleased that fares are moving to a more realistic level.
Posted by SotonBus at 19:20