A Leeds man is calling for all buses in the city to have audible announcements giving the name of the next stop. The Yorkshire Evening Post reports how Sajid Ali, who is blind, has difficulties using the bus that could be alleviated by next stop announcements. He explains that they don't even need to be automated - drivers could make the announcements. This blog supports Sajid's campaign wholeheartedly. So far only London and a few higher end bus companies bother with next stop announcements. But on the continent, they come as standard and have done for years. When I lived in Berlin in 1999, some of the older buses that didn't yet have automated announcements had the driver making a live announcement of the name of each stop, so it absolutely can be done. It makes bus travel so much easier and more attractive not just for blind people, but also for tourists and anyone who is unfamiliar with the local area. You can join Sajid's campaign on Facebook here.

Winsford residents are up in arms about Cheshire West and Chester Council's decision to axe a once a week Saturdays-only link to Liverpool. A campaigner tells the Winsford Guardian that the cut to the X22 will turn the town into a "prison camp" and describes the route as "popular". At first I was sympathetic to the cause, but then I looked at a map of Winsford... 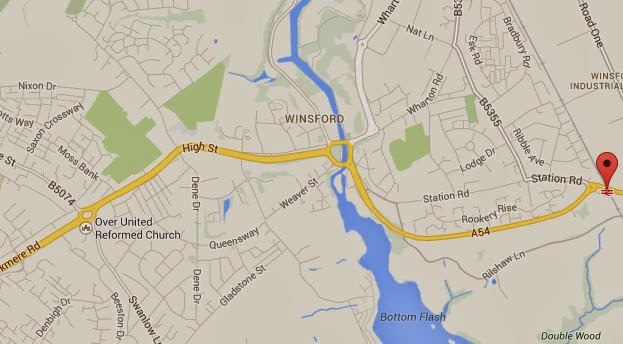 Highlighted is the town's railway station with an hourly direct service to Liverpool (and a local bus that stops outside). So what's the point of the X22 bus? If it truly was "popular" surely it would be run commercially rather than relying on taxpayers' cash from the council. Of course it might well be popular with pensioners, none of whom pay a bean to use the bus, therefore making a commercial service out of the question. Yet another reason to scrap the pensioners' passes, at least in their current unaffordable form. Nobody is isolated in Winsford: see the times for all of the trains that go to Liverpool here (£6.85 day return with a senior railcard).
Posted by SotonBus at 21:44