Sneak a peak at Somerset

What's happening in Somerset? First have rebranded their network centred on Taunton as The Buses Of Somerset. There's a new green livery and a website with a network map that uses the same styling as the Go Ahead group.

It doesn't look like part of First, so is it being sold?

Before, passengers on this network could use a FirstDay South West at just £7... 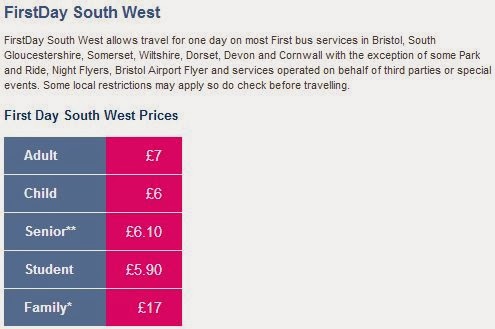 ... not only cheaper, but valid across a much, much wider area.

This will mean fewer tourists from surrounding areas connecting with these routes to visit central Somerset. Of course, anyone 'lucky' enough to be on this new network is now cut off from the wider First network unless they pay again at the new boundary, be that in Weston-super-Mare, Yeovil or Wells.

After the chaos of competition following deregulation, we've had the benefits of consolidation on wide networks and those wide networks are now seemingly being dismantled (by First at least) from within to make sure that they are of use to as tight a demographic as possible. Whatever happened to buses working in the interests of the wider economy, for all?
Posted by SotonBus at 21:28